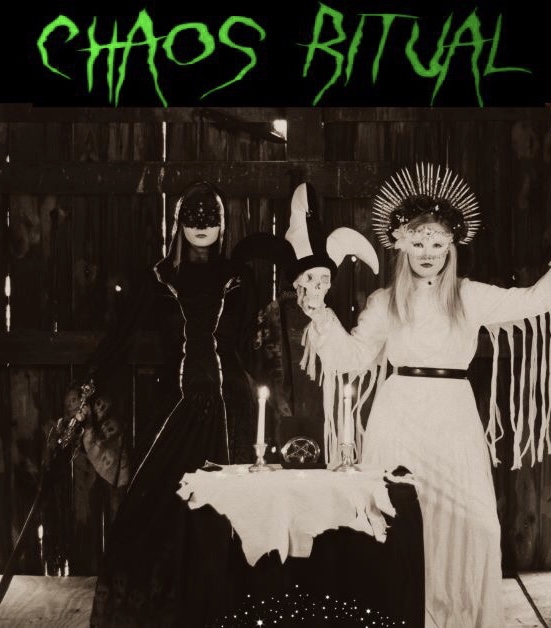 Chaos Ritual are a progressive, metal band hailing from Ohio, in the Midwest of America.  Their sound, as heard on their self titled debut, also has a clear thrash influence – as demonstrated on tracks like The Show, S.T.F.U and Machine.  It’s an album well worth hearing, particularly if you’re a fan of a band like Flotsam and Jetsam.

Noise Pollution recently had the opportunity to speak with one of the five piece bands guitarists, Ace Parlier, who speaks on the bands inception, their debut album and their goals for the future..

What does the name mean to you?

We’ve come to agree that everything is a Chaos Ritual. Life is a Chaos Ritual. We spend a great deal of our adult lives trying to put order to chaos. Those who approach life with a bit of art and tact develop tricks or hacks to simplify the task. It becomes a ritual.
We like the Zen of it. It encompasses everything but contains nothing.

Where are you from?

We are from the East side of Cincinnati, Ohio, USA.

What genre do you fall under?

Metal. We call it old-school metal with a twist.
We are all fans of 70’s metal and 80’s thrash. All of that music has been filtered through our individual influences to inform our songwriting.

Give us the story of your formation..

Brent and I were in a metal band together years ago…The Malevolent. We had both been out of the business for a while…raising families, working. About two years ago we got together and started playing around with some of the old Malevolent tunes that were never used.
Brent had no doubt about the strength of the material. He said it would be a shame to just let the stuff go to waste. We needed to start another band.
I was apprehensive at first but, as he and I worked through the material, I heard that the magic was still there. We always worked well as a guitar duo but, then, after practicing together for the better part of a year…We were vicious….
So, in late 2017, we started looking for musicians. I reached out to Glen, our bass player, who I didn’t know, but I knew the band he was in had broken up, so I was hoping he was available.
It turned out he was trying to put something together with Shawn and Rick, both of whom I knew. We went to school together. Shawn and I actually graduated together. He’s a phenomenal drummer and had played in some really cool bands over the years, so Brent and I went in with a good vibe knowing everyone had tons of experience, and that very first night, it was just fucking magic…. We all locked in together and tore it up. It was just obvious.
We wrote our first song together, Social Destruction, that night from scratch, and it’s been Chaos ever since…..

Tell us about your influences..

I’m all over the place. I have very eclectic tastes. As far as guitarists go though, my two main influences are Ritchie Blackmore and Randy Roades, but I also admire Tony Iommi, Frank Zappa, Steve Vai, Lindsey Buckingham and Stevie Ray Vaughn.
Brent is a straight up metalhead. He’s into Yngwie Malmsteen, Craig Locicero and Phil Demmel.
When we started working on our own dynamic duo we studied all the great duos; Tipton and Downing, Hanneman and King, Hetfield and Hammet, Glen Buxton and Michael Bruce, Rudy Schenker and Uli Jon Roth. We were just knocked out by each duo’s dynamic, their interplay. We’ve worked very hard developing our own style.  As a band, we’ve found tons of common ground in our influences, Slayer, Megadeth, Overkill, Death Angel, Sanctuary, Flotsam and Jetsam, Sacred Reich, Violence, Savatage, Rush, Dream Theater, Rainbow, Deep Purple…They all play in the jam room during rehearsal breaks.

Tell us about your latest release..

The songs on this album came together quickly. Once we all settled into working together they just came pouring out.  Then, over the course of our first year, we tightened them all up playing everywhere we could get our foot in the door.  We went into the studio in March of this year with our good friend, Ron Pease, and hammered them out.  It’s a diverse group of songs. And that was very much by design. We wanted to grow as songwriters. We pushed ourselves to explore the limits of the sound we had created.  I’m very happy with how it turned out.

It’s available on iTunes, Spotify, Shazam, Amazon…tons of other download sites. You can get physical copies from the CD Baby website…or at one of our shows.

What are your goals for the band?

To keep moving forward, to progress…We want to become better songwriters and better musicians. We want to write epic shit! Beyond that, we would love the opportunity to tour the world. We’re still a few steps away from making that a reality, though. We need to get out and explore our own country first.

If you could share the stage with any other band or artist, who would it be?

There are so many….Death Angel, Overkill, Judas Priest! All of those bands we grew up emulating.

Tell us about your live shows?

Our live shows are crazy…Our singer, Macko, is a madman….You quickly learn to keep an eye out for him…He’s all over the place. He has a knack for drawing a crowd in. You can’t take your eyes off of him because you don’t know what in the hell he’s going to do next….

Any upcoming gigs to promote?

July 18th, we’re opening for Sanctuary at home in Cincinnati. They’re playing the entire Refuge Denied album. It’s going to be a great show! Definitely a checkmark on the bucket list…

Our sound. I think we have our own vibe. It’s heavy but has its own groove.

Explain why listeners should give your music a listen…

To hear new tunes…something you haven’t heard a million times before.

What has been your bands greatest achievement so far?

This album….There’s been a lot of blood and sweat invested in it. I think it captures where we’re at now and where we aim to go…The elements are all there and there’s plenty of room to progress.

There you have it folks.  Chaos Ritual are a band that make awesome music, but clearly remain grounded – They have a clear vision of who they are, and where they want to head, with realistic goals to get them there.

The debut album is fantastic from start to finish, and I highly recommend that you check it out.

You can keep up with Chaos Ritual at the following links;