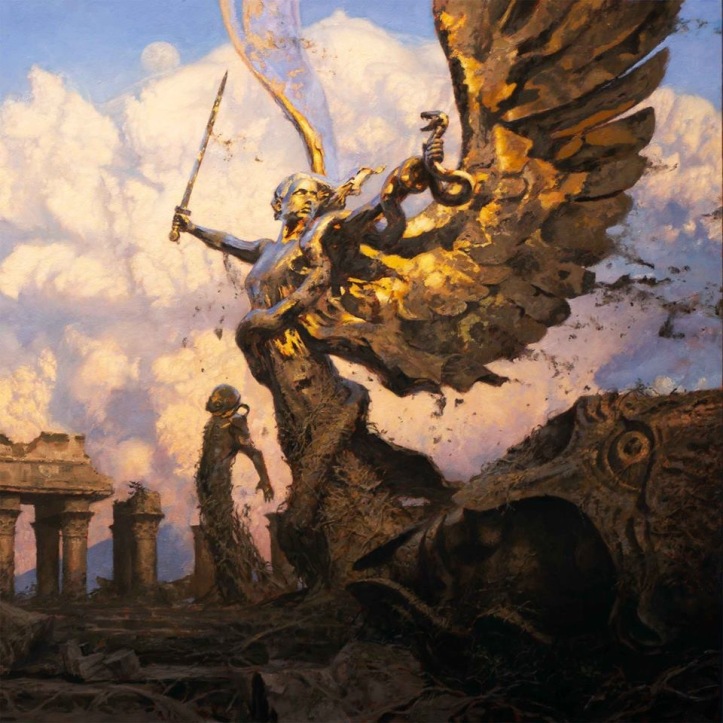 Something I do before I listen to any album is to look through the titles of the tracks. As I looked down the list I wondered what maniacal adventure I was about to be taken on…

“Raise the Storm” kicks off with a distorted guitar scream and this settles into a kicked back, dirty guitar rhythm. The track is relatively slow in tempo and feels like heavy ‘70s rock. Vocalist Matt Hyde has a voice that tells a story – it grabs your attention and has you feeling all sorts of challenges.

“Wolves and Prey” is in a dropped key, is intentionally depressing and is complex in nature, with heavy layers of guitar. “Storms on Mars” is a good bit faster and a different style with less distortion emerges. It is plaintive, with the words ‘let me live’ used often. The track includes a section with an engaging drumming hook and reverberating vocals that cuts through your soul. The track then fades away at the end.

“This Moral Decay” feels like the ‘70s again and is like someone crying out in the dark. It returns to the more complex sound, with lots of layered and distorted guitars. “Omens” is a longer track and it again features a dropped key, with the guitars grinding out unfettered. This track feels like a difficult journey.

“Sound of the Grave” starts stripped back and Hyde’s vocals take centre stage, giving the track a troubled and challenging patina. “The Traveller” is an expedition indeed,  launched with an attention grabbing harmonic guitar opening that serves as a rich counterpoint to Hyde’s vocals. This morphs into their trademark guitar density of sound and the track changes gears a number of times.

Before “Like Dried Blood” started, I was hoping that it served to be the poignant closing to the album. It didn’t disappoint. It started out with piano and a slower tempo that soon intensified.

I finished the experience of this album feeling challenged and confronted. What the hell? But on the band’s website, I found the following:

“New album chronicles vocalist Matt Hyde’s battle with Non-Hodgkin Lymphoma – ‘The fear of death is enough to make you want to live.’

In January 2018, 1 week after our singer Matt completed his chemotherapy treatment, we booked 10 days at Blue Barn studio to record a new album.

Although Matt was responding well to treatment, the band felt an urgent need to capture new songs as a thank you to all the fans that supported him and as a way of reconnecting with each other after our tumultuous breakup.”

The band also stated that Matt’s illness put them and what they meant to each other in perspective. Adding to the story behind this record, Matt Hyde said, “Throughout the treatment I was numb. It’s interesting to have the ability to confront that, to confront the void, to confront the idea of mortality. I didn’t make peace with it either.”

Given all of that, this is proof positive that life imitates art. I cannot begin to imagine what Hyde and all those close to him went through in this period. However, the album gives me an idea of what they experienced. It is significant not only because of its artistic merit, but the snapshot that it provides into what folks go through in life-threatening times.

In the words of the band, “Obey the Riff, Long Live the Beast”.