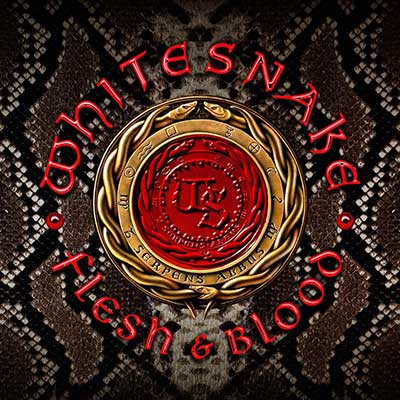 8 years have passed since the last Whitesnake album of original material (2011’s Forevermore).  In that time they gave us a mostly forgettable Deep Purple covers album, some re-issues, and a collection of live albums that didn’t really hit the mark.

It’s definitely time to unleash the Snake upon the world again, and if you grew up on David Coverdales flashy brand of 80’s radio rock, Flesh and Blood will give you exactly what you desire.  This album won’t be for everyone though.

Good to See You Again is their re-introduction to the world.  Coverdale is sounding pretty good, but it’s fairly cliche (which will come up a lot throughout the album, I’m sure) and ultimately far too repetitive.

Gonna Be Alright is a love song, that not only follows all of the cliches, it ramps them up tenfold.  Shut up and Kiss Me features some excellent lead guitar, coupled with some up tempo riffing, while Hey You (You Make Me Rock) is an arena level anthem.

Always and Forever is a perfect example of the 1987 style of pop rock that made Whitesnake a massive commercial success.  I mean that in a good way too, as it might be the best song on offer here.

When I Think Of You (Colour Me Blue) is the obligatory ballad, that again shows at least hints of their 1987 era.  Trouble Is Your Middle Name is a ballsy hard rocker.  The title track crawls along, and Well I Never is the least memorable song of the entire album.

Heart of Stone is designed as an anthem, but fails to hit the mark, while Get Up brings some life back to the record with an up tempo shuffle, and some great backing vocals.

After All is a gentle nod to Led Zeppelin that works brilliantly, and to close out the album proper, we have Sands of Time.  It’s an epic 6 minute track, showcasing the best of Coverdales vocals, some outstanding guitar and possibly the best lyrics of the album.

The album comes complete with 5 bonus tracks, but I’m stopping here, because Flesh and Blood already seems far too long to me.  It’s not a bad album, certainly not their worst, but far from Whitesnakes best.