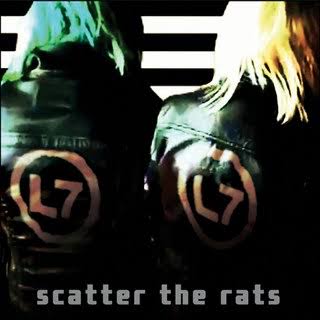 L7 were always lumped in with the “grunge” movement of the early to mid 90’s, but much like Nirvana, they had a pop edge to their sound, while also leaning into a punk rock style.

Scatter the Rats comes 20 years after their last album, and while so much has changed in that time, particularly the music industry itself, L7 sound a lot like the band we last heard on Slap Happy.

On Burn Baby, we get a very familiar sounding L7.  There are no changes to the L7 sound, drastic or otherwise.  Fuzzy distorted guitars transport us back in time to when grunge was king, and it’s a welcome return.

Fighting the Crave is a catchy track, leaning into the poppier aspect of the bands repertoire, while Proto Prototype ups the anti with a heavy, sludgy sound that is very satisfying for me as the listener.

Stadium West sees L7 change it up a little, for a track that was released as a single.  It’s a faster paced, and more upbeat song, driven by nostalgia inducing hooks, and some perfectly placed hand claps.

Murky Water Cafe sees Suzi Gardner take the main vocal duty, for a track that is as murky as its title suggests, but in a good way, adding some more variety to L7s songbook.  Ouija Board Lies brings back the fuzz, chugging along in a standout track, in my opinion.

Garbage Truck is punk rock gold, while Holding Pattern returns to the feel of Murky Water Cafe, but in a more fleshed out, and definitely superior way.  Uppin’ the Ice is quite melodic, and also features a beat that you could dance to.  Another welcome element to the L7 sound.

Cool About Easy returns to sludge and fuzz, and Donita Sparks vocals are suitably strained here.  I’m not sure if they took a “save the best for last” approach, but on the title track,

Scatter the Rats, they certainly come close to the album highlight.  This is a track that encompasses all that came before it.  Mid tempo and sludgy, but groovy, and with an undeniable pop sensibility at its core.

This is a strong album, almost unbelievably strong, for a band that hasn’t released new music in two decades.  With no disrespect, L7 will never come close to the commercial success of “Pretend We’re Dead”, but if they continue to release music as reliable as featured on Scatter the Rats, they will certainly have a strong second coming.