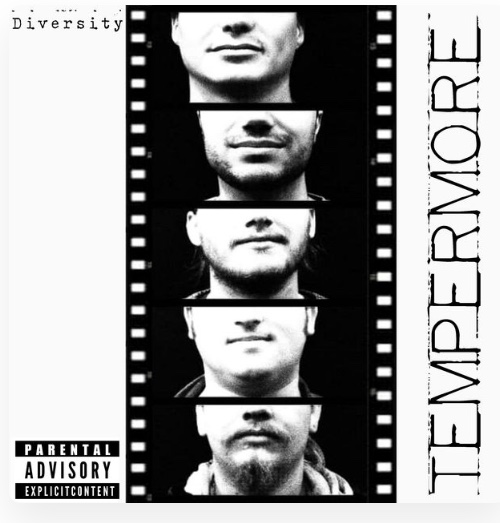 Tempermore are 5 piece “adult alternative” band from the Central West region of New South Wales.  If you’re asking yourself exactly what “adult alternative” is, you are forgiven, because it was a head scratcher for me too.  Until I pressed play on their debut EP, Diversity…

(As an aside, I honestly can’t find where I seen this term used for Tempermore, and hopefully I didn’t just make it up, but it works.)

It’s simply a mature version of alternative music.  Think of the Australian version of what Pearl Jam evolved into, or Red Hot Chilli Peppers circa By The Way, and that’s pretty much it in a nutshell.

Tempermore are simplistic in their approach.  It’s understated, never over the top, and very easy to listen to.  Travelling Sideways opens up the EP, and it’s a driven by the guitars from Alexander Kastrounis and Jason Ferguson.  It’s a stripped back rock song that will get your foot tapping for sure.

Poppin features some really soulful guitar flourishes, with a forceful vocal delivery in the chorus.  I love the way the Australian accent shines through in the vocal delivery here too.

Magic Man is a laid back number, while Funk in the Dark gives me a very RHCP vibe in its beginnings, but definitely once it kicks in, and that’s all in the funky bass and jangly guitar riffs.  I also get a Hilltop Hoods vibe in the almost rapped vocals from this track.

Bliss is possibly the highlight of Diversity for me.  It’s the culmination of all of Tempermores influences rolled in to one neat package.  Soulful yet funky, and with a guitar solo that really shines.

The title track rounds out the EP, and much like on Bliss before it, the band make great use of all of their influences to build a very strong song.

I’m very impressed with what I’ve listened to here from a band at the beginning of their sound.  I fully expect Tempermore to really come in to their own as they further develop their career.