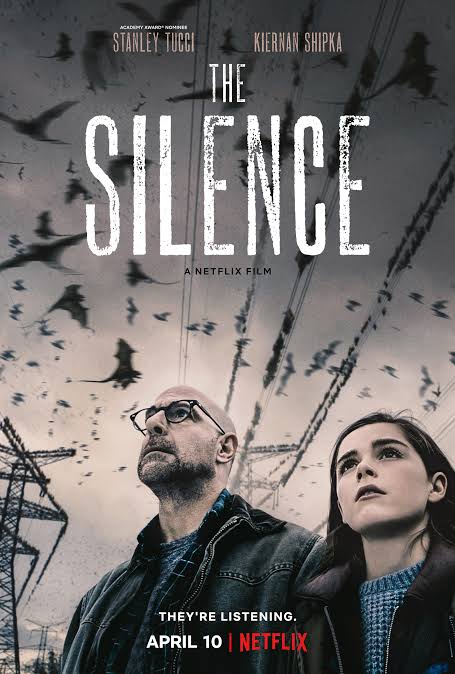 Netflix has released The Silence, the new film directed by John R Leonetti of Annabelle fame.

The plot is as follows; The story of a family struggling to survive in a world terrorized by a deadly, primeval species who have evolved for millions of years in the pitch darkness of a vast underground cave system, hunting only with their acute hearing. As the family seeks refuge in a remote haven where they can wait out the invasion, they start to wonder what kind of world will remain when they’re ready to emerge.

The Silence is not completely terrible, but it does play like a made for TV movie.  It’s obviously a smaller scale budget, which shows in parts.  Other than Stanley Tucci and Miranda Otto, there are no actors in main roles of any note to be found, and I’m left wondering why those two are here?  They’re better than this.

The bats look good, but in all honesty, they are just not scary enough for a creature feature, and I’ve mentioned before how much I love a creature feature. The additional antagonist added towards the end in “The reverend” seems unnecessary, and not at all fully fleshed out.  It’s almost as if the filmmakers realised that they needed something more at the last minute.

The cinematography is pretty good, but when you take the plot holes and average acting into consideration and couple that with the fact that this is a blatant capitalisation on the success of the far superior “A Quiet Place”, The Silence simply falls flat on its face.

The Silence is extremely predictable, and tries too hard to be suspenseful.  I’m not going to be on the edge of my seat for something I’m expecting.  Too much foreshadowing ruins the surprises in a big way.

Netflix already attempted a very similar thing with Bird Box, and while that film is superior to The Silence, both pale in comparison to A Quiet Place.