Babylon Shakes recently dropped their  debut full length album “Exile to the Velveteen Lounge”, and amid all of their current touring, the bands vocalist/guitarist, Chris Clark, made some time to speak to Shayne about the excellent album, and where they hope to see themselves in 5 years time. 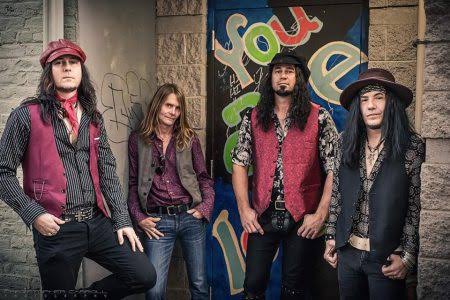 I know you must be really busy at the moment with the album being so fresh?

Yes we have had a great initial response to the album release, and have been busy touring in support.

Tell us about where you’re from, and how Babylon Shakes was formed?

I’m from central North Carolina and grew up in the Graham, NC area. Very quiet small town atmosphere but MTV and music magazines got me interested in rock n roll. Hanoi Rocks, Aerosmith and NY Dolls became my heroes and I picked up a guitar and pretty much taught myself how to play.  Babylon Shakes has always been my dream band. A group of really close friends who are essentially brothers and have the same musical dream to follow. I met Jeff Mortimer in July of 2017 at a Faster Pussycat after party and we really hit it off. I sent him demos I had been working on and he was blown away. He and Gary were longtime friends so we had our bass player. We added Dave last December because Gary wanted to play guitar and Dave just fit us like a glove.

The band name puts me in mind of a band name like Hanoi Rocks.  Tell us about where the name comes from?

It really has a Hanoi feel to it! I was totally inspired by them and their look and sound. It is symbolic of the best hard rock you would play at the end of the world- well the end of the music industry- when there’s nothing left to lose.

How would you describe the bands sound?

Ours is a blues based, rough edged hard rock n roll sound.  Anthemic party music for people on the edge.

Tell us a little bit about your musical influences?

I have always been influenced by artists that really put themselves out there- artists that pushed boundaries and had a unique vision and point of view. I’m a huge Aerosmith fan and love the way the band rolls as a unit. Hanoi Rocks are like the glam rock Stones. Just amazing band that had a massive impact but kinda snuck in under the radar.

What about influences outside of music.  Are you inspired to write by current events, personal experiences or something like movies or books?

Outside of music, I love vintage fashion and thrift shopping. Science fiction of the 70s and 80s. I read lots of musical biographies and enjoy art history. I’m also a user experience designer and graphic artist.

How has the recent line up change shaped or affected the bands sound?

Bringing Dave onboard has been just like adding another brother into the family. He’s an incredible player and a wonderful person and our sound is bigger, bolder and more rounded out.

Tell us about the image of the band.  You’re presented as “sleaze rock”, but there’s a lot more going on in the music.

We all decided pretty quickly that we wanted our image to be a big part of the band so we culled our influences and went back to the early 70s and 80s to emulate our heroes. We want to look different in every way possible. We want to be distinct and stand out from the pack and we enjoy finding crazy clothes and scarves, etc. We are pulling together pieces of a dream- from the Stones to the Dolls. We want to be a part of the legacy in any way possible. 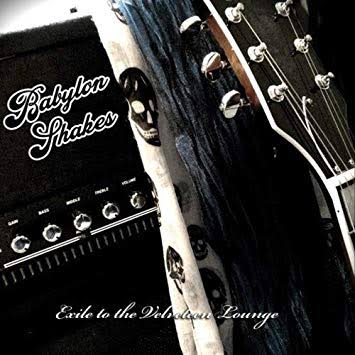 Tell us about your excellent debut album, Exile To The Velveteen Lounge.

The 10 songs on Exile span in age from 2007 until early last year. Some songs like “Die Pretty “ and “Hard Times” are ideas I had from 10 years ago but it wasn’t until we started Babylon that I pulled them together and fleshed them out with the band. Once we started jamming together, I was so inspired that the remaining songs came really easy. We recorded everything at Gary’s house, Silver Tongue Studios, and worked with an amazing engineer Zach Jones.

How does it differ from the bands earlier material in your opinion?

Everything is still so new and fresh for us. I would say we are progressing as artists and our influences are still rooted in the blues and early rock. We play more acoustic material now and they will most likely be reflected on newer material.

Where is the album available?

Hard copies are available at our labels site- Highvolmusic.com and through our official band site- babylonshakes.com You can also find us on all digital and streaming services from Apple, iTunes, Google Play and Spotify.

The reviews have been very positive.  How do you plan to build upon that?

We are really excited about that and the live shows have been amazing! We are in promo and tour mode for the rest of 2019 and hope to reach as many new fans as possible.

What exactly is a Velveteen Lounge? And why did that seem like the perfect album name?

”Velveteen Lounge“ is just another name for Gary’s basement studio and bar. It’s where we rehearse, record and relax. We are definitely in our own little world there and we called it the Velveteen Lounge as kind of a proper slang for a glam/sleazy rock n roll cocktail bar.

Are you already working on new material, or are you going to tour this record for a while before you think about hitting the studio?

We have been jamming on a few new songs, but right now, we are solely concentrating on promoting “Exile” and getting it out there to the public.

What  could a fan expect from a Babylon Shakes like show?

We are very social creatures and love meeting and talking with our fans. Our shows are high energy, loud, fast, fun and intense.

Any plans for overseas touring?  I’d love to see you guys here in Australia..

None at the moment, but we certainly dream of coming across the water and playing in Europe and Australia. That is our dream!

What has been the biggest gig you have played so far?

So far, that would have to be Rocklanta back in March of this year. We played with Hardcore Superstar and Firehouse, XYZ and a host of heavyweights at Center Stage in Atlanta, GA. We were incredibly nervous but man it was a dream come true to play on a big stage to a large crowd and see people singing our songs. It doesn’t get any better than that!

What are your ambitions for Babylon Shakes?  Where do you hope to see the band in 5 years time?

We started with no expectations at all- just can we all play together and get along? And from there everything has aligned perfectly for us and we couldn’t be any more excited or optimistic. We would love to record more albums, tour more of the US, Europe and Australia, make more videos and keep going as long as we can. We would love to play on bigger festival shows and maybe rub elbows with our heroes along the way.

Leave us with a message for your fans.

We want to thank everyone who’s bought the album, liked us on social media or seen us live- you are the reason we keep going- your inspiration and passion lets us know that we are indeed doing something right!