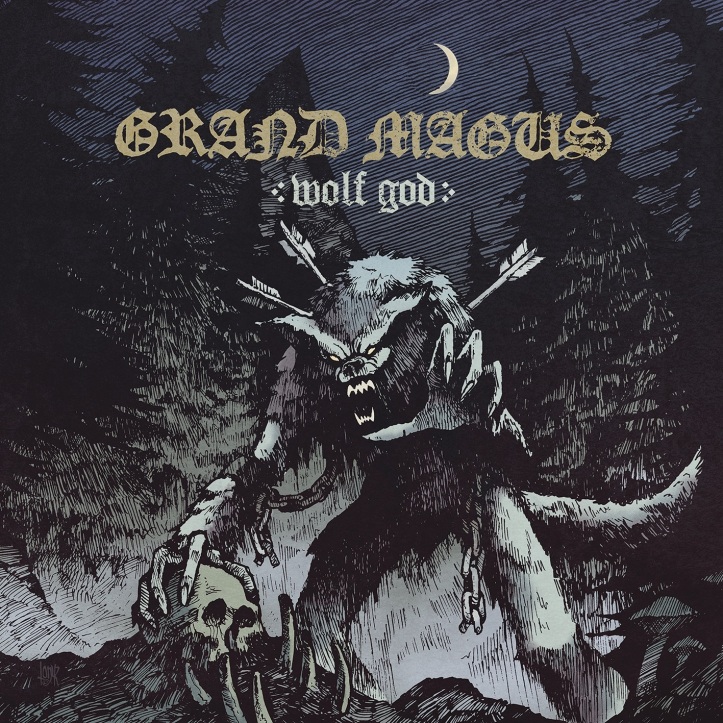 Grand Magus have been around for near on two decades now, over time, making the transition from doom lords to champions of more traditional metal stylings.  The new album, Wolf God, is a bit of a course correction as far as I’m concerned, particularly after 2014s Triumph and Power and 2016’s Sword Songs both fell short of the mark.

Wolf God opens with the instrumental Gold and Glory, and I laugh a little, because it sounds SO MUCH like I’m about to watch an episode of Game of Thrones… it is a cool piece of music though.

The title track kicks in, and takes things in the right direction.  It’s a sludgy, riff fest with vocals that are a real return to form for the band.  A Hall Clad in Gold is an epic tale, set to a musical backdrop that is the perfect blend of Motörhead and Sabbath.

Brother of the Storm, a mid paced rocker,  features soaring vocals, amid more of those familiar riffs.  Dawn of Fire follows the same formula, while Spear Thrower speeds things up a tad, and offers Manowar style lyrics.

To Live and Die in Solitude proves to be a highlight of Wolf God for me.  Galloping riffs are delivered throughout, and in my opinion this is one of the best vocal performances on offer from Janne Christoffersson.

As we draw towards the end of Wolf God, Glory to the Brave features some of the heaviest riffs of the album and a fist pumping chorus that brings Manowar back to mind.  He Sent Them All To Hell is possibly the most straight forward rock song of the bunch.  It’s very accessible, and there’s no reason why it couldn’t find a home on rock radio.

Untamed closes out the album, and it is just that.  Grand Magus really let loose here, with some killer guitar work and a glorious drum sound.  Certainly a great way to close the album on a high.

Overall, Grand Magus have delivered the best album of at least the last 10 years (again, only my opinion).  At this stage of their career they might be getting a little repetitive, but that’s fine.  They know the sound that works for them, now a decent blend of doom and traditional metal, and they are sticking with it.  It worked for Motörhead, and it worked for AC/DC, so it can work for Grand Magus.

The cover art is awesome too!