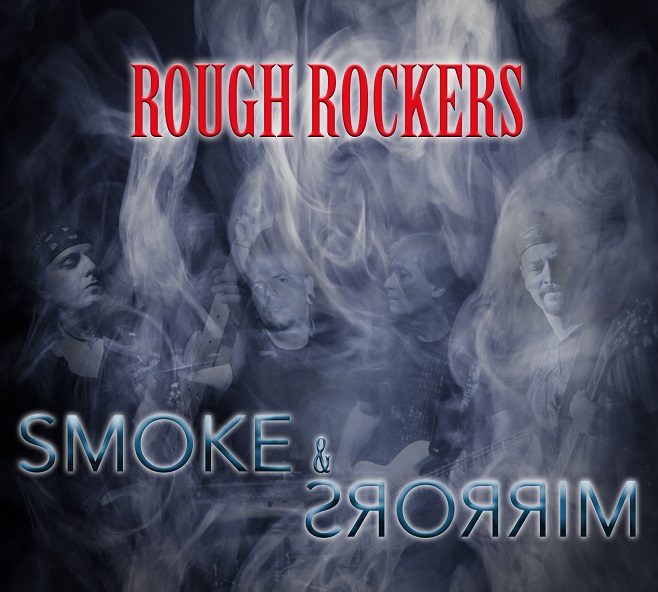 Formed in 2012, Stockholm’s Rough Rockers, who feature Aussie guitarist Joe Matera in their current line up, will release their new EP on the 29th April.

The Smoke and Mirrors EP features five tracks of straightforward rock songs, that are raw and unpolished.  The rawness works for music of this style, but the unpolished, almost unproduced feeling maybe takes a little away here.  A raw sound can still be achieved with better production values.  There’s also a guest appearance from legendary Alcatraz and Rainbow singer Graham Bonnet (who incidentally tours Australia in June).

Opening with a re-recording of the bands 2013 track No More Heroes, we are given a high octane rocker that would have no problems fitting in with the classic rock of the 70’s.

Murder at Midnight has a Deep Purple meets Thin Lizzy feeling for me, which works well.  Vocally the song has an early punk rock, almost spoken word style, that shouldn’t fit the song, but somehow Rough Rockers make it work.

The title track has a lot in common with The Darkness, in that it’s catchy, and poppy, but with a hard rock edge.  Rebel at Heart (which features again next, but acoustically) is far more melodic than anything else here, but while the rawness of the other tracks suit their style, this track could have benefited from a little more polish production wise.  Musically, the track features the best guitar work on offer.

Unleash the Beast closes out the EP, with the hardest track of the release.  It’s a galloping rock song that has a lot in common with NWOBHM, and will certainly impress the old school fans.  The guest turn from Graham Bonnet here is a great inclusion, while the guitar solo is easily the most fully formed of the record.  Easily the highlight track of the EP.

Overall, Smoke and Mirrors is a pretty decent release, but with just a little more production, Rough Rockers could have had better than decent on their hands.