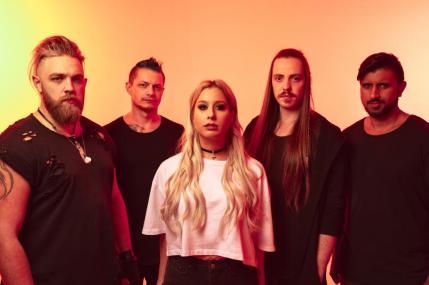 The Last Martyr featuring Monica Strut on vocals, Ben Rogers and Travis Presley on guitars, Matthew Mumford on bass and Vin Krishnan on drums are set to release their debut EP, Creatrix, on April 26th.  Check out the track Fear from Creatrix below;

The opening track, Into The Black, has a somewhat deceptive opening, starting off with a pop rock vibe, before pummeling you with a barrage of riffs and some really aggressive vocals from Monica Strut,  which I love.  It’s a really well put together song that should please a big portion of the rock and metal contingent.

Stay Awake is the next track, and it follows a fairly similar formula as Into The Black, although the guitarists are unleashed a little more here, and the vocals are absolutely phenomenal.  This is a band who has found the sound that works for them, and they are going to stick to it.

Next up is Fear, and personally I would give this the highest marks of the EP.  In my opinion it’s easily the best vocal performance particularly in the mid section break down.  The band deliver crushing riffs, reminiscent of Korn.

Echoes and the title track close out the EP, and continue to demonstrate the range and talent of vocalist Monica Strut, formally of Sydney’s Vanity Riots.  It’s remarkable how she is able to sound like Hayley Williams from Paramore one second, and Alissa White-Gluz of Arch Enemy the next.  It’s equal parts harmony and aggression, and it works perfectly over the musical landscape crafted by the band.

The Last Martyr, as a band, are on to a really great genre defying sound here, and I fully expect them to connect with a large audience.  For a band to deliver music this good, before they have even played their first live show is a very rare occurrence, and once they start to get some gigs under their belt, there’s no reason why anything should stand in their way.